The forests of the Mata Atlântica biome used to occupy the entire coast of Brazil. Currently, these forests are among the most threatened natural environments on the planet and, therefore, are in urgent need of actions that will conserve, restore, and value their biodiversity. Mata Atlântica forests are comprised by many ecosystems, classified according to geographic, political, and phytosociological parameters. Hileia Baiana has one of the greatest tree species diversities on the planet. Hileia Baiana’s forest biodiversity, coupled with its human and cultural diversity, make it an ideal area for economic development associated with forest conservation and rural development.

The greatest challenge facing the Model Forest is to foster an identify of forest biodiversity in order to promote forest restoration, conservation and production linked to sustainable environmental and water management, as well as economic development within the territory.

The southernmost part of Bahía and the north of Espíritu Santo were originally covered by dense rainforests, characterized by their exuberance and richness in plant species.

This was Brazil’s first biome to be exploited, and the Pau-brasil (Paubrasilia echinata) was the country’s first export product. Since then the region has undergone intensive timber production as well as deforestation to establish cattle ranching. Currently, both activities are prohibited however, they persist illegally.

Eucalyptus production, established in the XXI century, is the second driver of landscape anthropization, after cattle ranching. Other important crops are cacao, coffee, sugar cane and yucca. Economic activity related to forest biodiversity remains nascent, with the extraction of non-timber forest products such as pink pepper and mangaba (Hancornia speciosa).

In recent times, there has been an increase in forest seed collection and the production of tree seedlings by the Arboretum Program, involving ten communities from the territory and contributing more than 500 species to forest restoration, increasing the biodiversity of species produced in Brazilian nurseries. 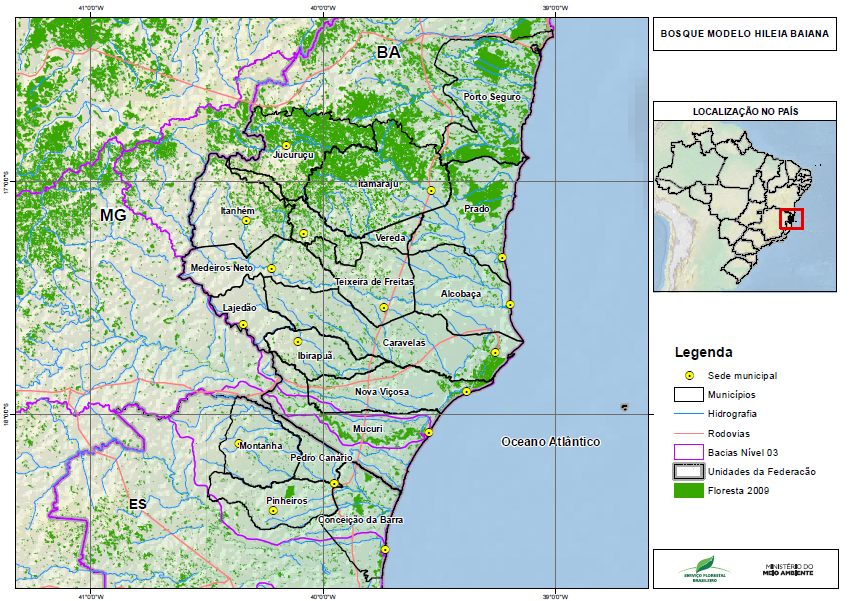 The Hileia Baiana Model Forest is led by the Arboretum Program, which began its work in 2019. It seeks to promote a wider stakeholder participation and encourage Model Forest actions across the landscape through specific projects aligned with Model Forest strategic goals.

Key actions in place to reach these goals:

Our global network
Explore the map or search the list for locations and further details.