Home > Our Stories > Reflections on Model Forest success in Chile 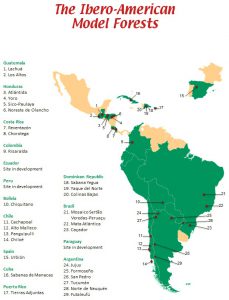 Araucarias del Alto Malleco Model Forest, Chile. After working day to day with leaders trying to implement effective integrated landscape management around the world, Abigail Hart, a Project Manager with Cornell University and EcoAgriculture Partners; a Washington-based NGO supporting the creation and sustainability of ecoagriculture landscapes; was still curious: “I found that I was still full of questions about the many faces of landscape approaches and their ability to generate tangible results at the community level.”

With that, she decided to dive more deeply into the experience of one landscape initiative — the Araucarias del Alto Malleco Model Forest. It is the oldest existing Model Forest in Chile, begun in 2002. The Model Forest is located in an area known for its large stands of native Araucaria trees and its fruit, the piñon, plays an important role in the traditional indigenous culture.

There is a long history of unsustainable forest management due to the intensive timber extraction in the past and extensive harvesting of firewood for household consumption and pulpwood for the paper industry. Now, the majority of remaining native forest is held by private landowners on small parcels who have limited knowledge and resources for carrying out sustainable forest management.

Hart notes one of the strengths of the Model Forest is its participatory nature. “They rely on the voluntary participation of members from many sectors, including large and small scale agricultural producers, local government organizations, entrepreneurs, leaders of indigenous communities, researchers and civil society organizations. Together the partners develop a common vision and coordinate action between these diverse local and regional groups.”

And cooperation leads to tangible outcomes. For example, new value chains for non-timber forest products such as the piñon, rose hips and wild mushrooms are being created (see an earlier IMFN story on the Model Forest’s NTFP activity at http://eepurl.com/SmZ45). The Model Forest is also helping to build increased capacity for local associations to vie for water resources and developing a climate change adaptation plan.

This September, Hart will be off to check out another Model Forest, the Prince Albert Model Forest in northern Saskatchewan, Canada. Watch for an update!

For the full story of Abigail’s Chilean adventure go to: http://bit.ly/1rBfVUY