Initiative 20 X 20 is a country led effort seeking to change the dynamics of land degradation in Latin America and the Caribbean by bringing 20 million hectares of land into restoration by 2020. Nine countries and two regional programs, including the Ibero-American Model Forest Network are participating in the initiative with private sector investors allocating US$365 million to finance their efforts.

The IAMFN has identified 17 Model Forests in 11 countries which combined hold 1.6 million hectares of degraded land area with potential for restoration, allowing countries that are not officially participating in the initiative to get involved, but also serving as pilots for territories in which the Model Forests have constructed good governance. 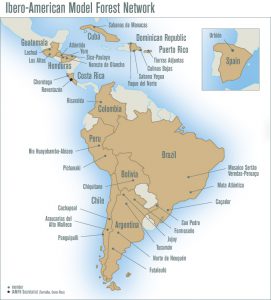 In Latin America, climate change is largely a land use issue. Nearly half of all greenhouse gas emissions in the region are the result of land-use change, forestry, or agriculture. Between 2001 and 2012, the region lost 36 million hectares of forest and grassland to agricultural expansion. Latin America now holds at least 200 million hectares of degraded land, mostly as a result of unsustainable agriculture practices.

Participants will work with leading research centers and the private sector to restore degraded lands. Cognizant of the various degrees of land degradation in the region, the initiative will also support efforts to recover land functionality (soil conservation and recovery; carbon storage; water retention and stable hydrologies; biodiversity conservation and recovery) through agroforestry, silvopastures, and other sustainable land use schemes.

“The fact that 20 x 20 is a country led initiative will guarantee that the efforts to be undertaken will be in line with the national strategies of land restoration,” explains Ronnie de Camino, Chair of the IAMFN. He adds, “[the initiative] will be tailored to the different Model Forests selected according to their social, economic and ecological contexts.”

Commitments to Initiative 20 x 20 are in support of the Bonn Challenge, a global target to restore 150 million hectares of degraded land by the year 2020 through forest and landscape restoration and also contribute to the United Nation’s Sustainable Development Goals.