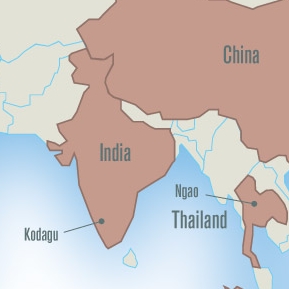 In the past, large areas of natural forest in India’s Western Ghats region were converted to teak plantations as part of a government plan to create timber stocks. Over time, the change from a biologically diverse ecosystem to a monoculture crop led to a change in the area’s microclimate, resulted in major forest fires and heightened levels of human-elephant conflict. Today, the area is one of the ‘hottest hot spots’ for biodiversity, meaning it is one of the world’s most threatened ecosystems due to anthropogenic activity. Kodagu Model Forest stakeholders are now working to phase out the teak plantations by planting various indigenous tree species to restore the natural forest and the area’s biodiversity.

Starting in 2012, Kodagu Model Forest initiated a pilot project to build local capacity for forest landscape restoration.  Approximately 12 hectares of teak monoculture forest with sparsely distributed trees was selected in the Devamchi Forest Range in South Kodagu as the pilot site. Local community members planted approximately 1200 saplings of various species, which has so far enjoyed a satisfactory survival rate (80%) despite an incidence of wildfire and grazing by herbivores. The grazing was eventually controlled by employing a shepherd and by covering saplings with thorny twigs.

In 2013, with support from the Karnataka Forest Department and the College of Forestry in Ponnampet, the pilot project was extended to cover another 33 hectares. Funding for restoration work to continue to a minimum scale of 150 hectares functioning as a demonstration site in landscape restoration techniques is expected in the near future. Beyond the environmental benefits, the selection of species such as Indian gooseberry (Emblica officinalis) and Chittagong wood (Chukrasia tabularis) was undertaken with a view to the potential economic benefits to be derived for local communities from both timber and non-timber forest products.

Balancing environmental, economic and social values is in keeping with the Model Forest approach to sustainability, also part of a global movement advocating landscape-level approaches.